It always upset me, when I was a child, that reproduction of Rembrandt’s Anatomy Lesson hanging in the wall of my father’s office.

I didn’t know then that Aris Kindt - whose body, naked, the colour of death, is laid out at the mercy of black-robed scientists porting impressive white collars - had been executed in 1632 in Amsterdam for armed robbery and murder, crimes he’d committed while attempting to steal a burgher’s coat.

I also wondered why most of the doctors didn’t seem particularly interested in what was happening in front of their eyes. They were looking elsewhere.  It was only later, much later, that I realized the solitary dance of glances that are not directed to a single point, that do not intersect; the absence of communication.

The despair of our total solitude before death, the one can never share with anyone.

A glance can find a way to speak through the silence, to speak of what speech leaves unsaid. Will the eyes ever meet?

This is far too important to be left to chance, mystery and witchcraft.

The doctor, Nicolaes Tulp, is looking straight ahead; at his left, an open anatomy book, De humani corporis fabrica by Andreas Vesalius, from which the painter copies the muscles of a forearm.

Are these muscles flexors or extenders? To be precise, they are the right flexors painted on the left arm, which is longer than the other one.

It looks strange, as if this Aris Kindt had two right arms.

When the entire scene was reproduced in the anatomy lab of the University of Groningen in 2006, the painter was found to have made four ‘mistakes’.

Perhaps this is Rembrandt’s way of saying that being entirely faithful to the subject matter isn’t all that important.

Subsequent centuries have tended to agree.

Some of the doctors look like they’re just passing through - there is movement in the scene.

One of them – an  ‘ideal suicide’? – seems mesmerised by the forceps held by Nicolaes Tulp. The others look on intensely, anxiously, as if expecting or seeking something - perhaps what Levi Strauss calls ‘le metier perdu’. The metier is the technique of painting, but also the lived event, the experience, the essence, its deeper components.
And what about the painting itself?  Where is the work of art?
On a dark rainy night, late in autumn, when the fear of decay and of the eternal cycle of nature dictate the strangest ideas, I stole the body of the robber from Rembrandt’s painting and hid it where no one will ever find it. In the kingdom of oblivion.

Then, slowly and carefully, I lifted superb Olympia and ritually laid her on the golden sheets, at  the empty space, in the same languorous pose as in Manet’s painting, her head and gaze turned to the spectator.

Rembrandt’s painting welcomes Manet’s painting. This is a long-term relationship.

In 1856, the 24-year old Manet travelled to The Hague and, as he often did with works by Old Masters, produced a small copy in oil of the 224-year- old Anatomy Lesson.

Truth be told, I wavered quite a bit between Manet’s Olympia and Tiziano’s Venus of Urbino. Despite their 325-year age difference, these two girls a very much alike.

They never tried to hide it: identical posture; drapery on the left; another person on a second plane; a slighly off-centre, two-parts composition; a dog in one picture, for loyalty, a cat in the other, for independence. Both naked, they gaze back at those gazing at them, entrapping them like a camera.

Manet’s girl is entirely divested of clothes and hypocrisy.

The other one, Tiziano’s, is swathed in the protective veil of mythology.

So I chose Olympia. I reckoned she was more likely to get the assistant surgeons to notice the change.

Several times that night I got up to check if their gaze had shifted, if they had been startled by the substitution.

Nothing. Their gaze continued to be refracted outside the frame as soon as it touched the place that until recently was occupied by the body of a dead robber.

But will you look at what I brought you.  A work of art!

Forget ugliness, illness and death and let your eyes linger on this woman’s body.

Olympia misses the silence between herself and the painter, when she posed for the work. The painter is no longer standing across her.

But her image remains, as recorded by him who was seduced by her form, indifferent to her person.

Olympia absorbs the painter’s gaze as Penone’s To Turn Upside Down Own Eye, absorbs the image of the world.

Then she becomse the observer. It is like an echo or shadow, this trace of continuity that preserves memory and defeats the fear of death. 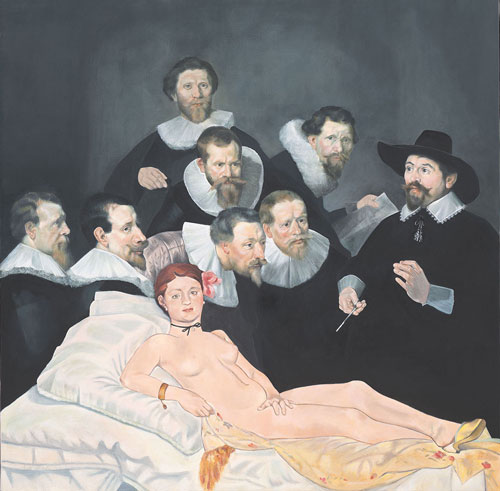